As you probably know, many young automotive YouTuber’s have quickly risen to fame with loud, fast, and wild exotics. Alex Choi is one of these young YouTubers who has made a name for himself building wild exotic cars and occasionally get in trouble law enforcement.

One of his more recent build is McDaddy McLaren 720S, which recently had an Armytrix exhaust added to it, to give it an awesome sound and more power. With that has come a few great videos which show off the car, the build, and Alex’s life.

YouTuber Shmee150 first introduces Alex Choi’s newly upgraded McLaren 720s and goes on an epic drive around LA to show off the supercar in full throttle.

The McDaddy is then featured on Daily Driven Exotics where Alex takes it out for a spin along with INSANELY loud pops and bangs on the drive.

Adding on to the insane exhaust upgrade, Alex turns the McDaddy into a fire breathing machine and shows off the valvetronic system with the remote control to get the BRUTAL V8 Sound!

TJ Hunt has been documenting every step of the modification process of his new Lamborghini Aventador. Although agreeing the factory exhaust sounds decent, he decided to take it a step further. What is most impressive is that he tackled this install by himself with some help from his friends at Throtl.

We teamed up with TJ to provide an entertaining install video and bring his Aventador to life. The key with this build is intuitive DIY install videos but on a half-million-dollar vehicle. While the installation was not easy due to the engineering, it shows just how much work it takes to modify a vehicle of this caliber.

Being a bolt-in solution makes a world’s difference especially when dealing with a Lamborghini which has very tight spacing within the engine bay. Opting for our Titanium Valvetronic exhaust system, the titanium construction allows for huge weight savings with the larger diameter tubing.

Without any restriction to the exhaust, TJ was able to achieve massive flames while increasing the performance. The tone from the exhaust provides an aggressive sounding acceleration with elegant pops and bangs after letting off the throttle. To be discrete the valves can be closed off for a mellow, factory, sounding exhaust.

After nearly two decades, Toyota has brought back the Supra, and while some enthusiasts might not like its BMW DNA, the A90 Supra has already become a popular platform to modify. Although you could argue the B58 under the hood is nowhere near as awesome as the 2JZ, it’s still a great engine with a massive amount of potential.

As with other turbocharged BMW engines such as the N54 or N55, the B58’s exhaust system is fairly restrictive. More specifically, the OEM downpipe off the turbocharger is very restrictive and replacing it can yield massive gains. Our friends over at ECUWerks were testing their tuning solution with the Supra and also installed our Armytrix downpipe to see what kind of performance they could squeeze out of the B58.

We expect to see even larger gains with a full exhaust system in the future. Be sure to check out the video below to see the Armytrix downpipe in action!
1st Pull: 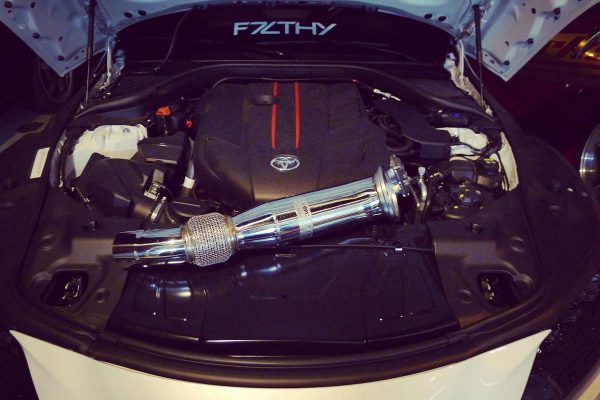 It’s no secret that the Ford Mustang is one of the most iconic American cars of all time. It offers superb performance at a very affordable price, making it a very popular choice for enthusiasts. Under the hood of the 2015+ Mustang GT, you’ll find Ford’s infamous 5.0L Coyote engine which outputs over 400hp.

With a 5.0L V8 under the hood, you would expect the Mustang to have a fantastic exhaust note, but Ford kept it very quiet and boring. Many aftermarket exhaust systems are too quiet or too loud, leaving you unhappy after installation. Luckily, the Armytrix exhaust for 2015+ Mustang is the perfect solution.

With our unique Valvetronic exhaust, you can keep your Mustang as quiet as stock or insanely loud with the press of a button. This works by using an exhaust valve to direct exhaust gases through or around the mufflers. We also offer a full Valvetronic exhaust system for the 2.3L EcoBoost Mustangs!

Aside from the awesome Valvetronic system, our Armytrix exhaust system also provides a big boost in power. For 5.0L Mustangs, you can expect +13hp gains. EcoBoost models can expect +16hp gains.

We all know how awesome the Audi R8 is. It’s loaded with Audi luxury and feel, but it uses the same engine as the Lamborghini Huracan. It’s fast, looks awesome, and performs well, but it lacks the sound many enthusiasts want from an awesome supercar.

Audi kept the exhaust system relatively quiet to appeal to a wide range of buyers and because of government restrictions. Luckily, it’s easy to replace the OEM exhaust system in favor of something which flows better than stock and provides a fantastic sound.

The problem with many aftermarket exhaust systems is the overall sound being too high or too low. Once you install the exhaust, it’s hard to make it louder or quieter, leaving you stuck with an exhaust you’re not happy with. We’ve solved this problem by using our Valvetronic system which uses an exhaust valve to direct the exhaust gas through or around the mufflers.
Features: